Meth Use Vs Manufacture

The studies tell us that around 90% of the chemicals in meth smoke is absorbed by the human body during use. That leaves 10% to float around the environment and settle on surfaces. This means that the resultant residue levels from smoking will be less than that of manufacture, but there will still be contaminants.

The methamphetamine manufacturing process uses and produces highly toxic chemicals. The toxins that 'cooking" produces is circulated around the environment in the dwelling and settles on any surface.  It is also absorbed by any porous surface the toxic residue settles on.  The surfaces "breathe" during the day through expansion and release toxins into the environment.
Smoking Meth along with Cooking meth is damaging your property!
​
There is plenty of misinformation circulating both in the media and the scientific community to date.  This leads to a mis-informed and fearful approach to meth contamination detection.

The facts are that manufacture of meth in a home will result in toxic contamination, perhaps of the whole house, perhaps of just the room the "cook" was done it.  You simply will not know unless you test.

The facts are that use and "smoking" meth in a home will result in toxic contamination, but only over time. Smoking crystal meth will result in around 90% of the chemicals being absorbed by the human body.  It doesnt take a meth user to work out then, that around 10 "uses" of meth will result in a build up of meth similar to that of simply lighting meth on fire and leaving it in the room to smoke and burn rather than inhaling it.  (10% x 10 uses = 100% for those without calculators) :-)

Essentially, meth smoking produces far less toxicity than manufacture.  But heavy meth use, heavy "sessions" from these meth users will result in a level of contamination that will eventually exceed the NZS8510:2017 standards of 1.5 ug.

There is no way to distinguish between meth use or meth manufacture.  But either way, you have to test to know what the levels are. There is no other way.

Don’t run the risk of Meth contamination for you or your family. Protect them, protect your asset, get a meth test done with the Xperts! Call Meth Xpert's!

The below video and image depicts the "differences" between Use or "Smoking" and Manufacturing or "Cooking" of meth.
CLICK HERE TO CALL US NOW! 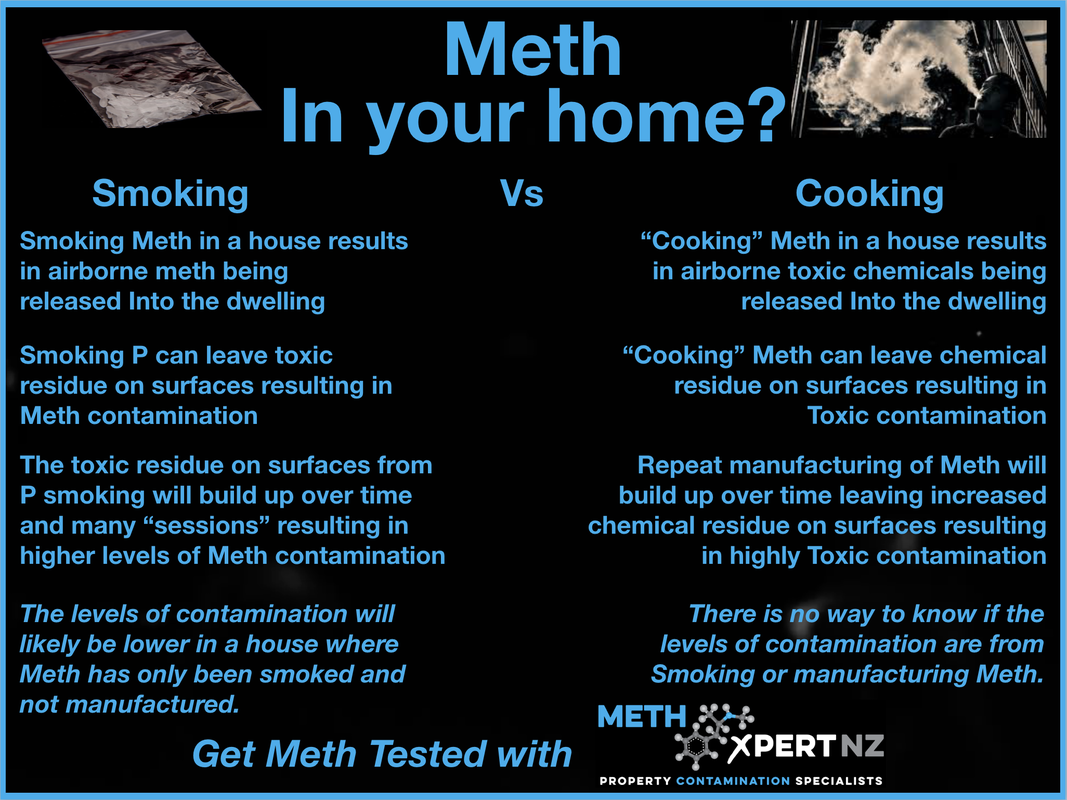